How Could I Forget About Syleena Johnson? 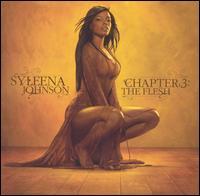 The ladies of R&B/Soul sure have been doing it up this year. Patti, Mariah, Jill, Fantasia, Alicia, Destiny's Child, Faith, Vivian, Leela, Lina, Jaguar, Amerie, Keyshia.....Add one more name to that list--Syleena.

I had absolutely no idea that her record was coming out so soon. Yes, Syleena Johnson's new record Chapter 3: The Flesh was released on Tuesday, September 13th. But I have one question, where was the promotion? Yes, there's been a video in rotation since about June/July for "Hypnotic." And "Another Relationship" has been receiving considerable airplay on urban adult contemporary stations. But other than that, who would've known that Syleena had blessed us with another masterpiece?

So how is the new record? Excellent. Superb. Chapter 3: The Flesh is her best album to date. It's soul for every occasion. The Flesh finds Syleena in her sexiest and most adventurous mood yet--musically, vocally, and lyrically. But she keeps it tasteful on tracks like "Phone Sex" and "Slowly." There's no raunchfest here.

Fans will also be happy to know that her voice (a gritty, sexy, soulful, and emotional instrument) remains at the center of attention. Standouts include the funky, celebratory "He Makes Me Say," an infectious duet with R.Kelly entitled "Special Occasion," and a rousing duet with Anthony Hamilton entitled, "More." Their voices, completely drenched in old school soul music (and gospel), meld beautifully together. Other notable tracks include "Time," "Apartment For Rent," and "Only A Woman."

The Flesh also features several collaborations. Many of which are in sequential order. Besides those already mentioned, there's "Bulls-Eye (Suddenly)" with Common, "Classic Love Song" with Jermaine Dupri, and "Phone Sex" with Twista.

Syleena has successfully brought old school soul sensibilities into a contemporary soul environment. Plus being the daughter of legendary Soul/Blues artist Syl Johnson she just can't help herself. I'm sure with this latest effort she's done her father and her predecessors proud. Now let's see if we can get her a platinum record.

If you haven't already, please check out her previous records Chapter 1: Love, Pain & Forgiveness and Chapter 2: The Voice.
Posted by BuddahDesmond at 12:37 AM 2 comments:

The 'Ultimate' Eurythmics
Good news for all Eurythmics fans. They have recently recorded two new songs as part of their retrospective Ultimate Collection to be released November 8th. The new songs are entitled "I've Got a Life" (1st single) and "Was It Just Another Love Affair." This will mark the first time in almost six years that Annie Lennox and Dave Stewart have teamed up since the 1999 release Peace. This 19-track set has all of the favorites like "Sweet Dreams (Are Made Of This)," "Here Comes The Rain Again," "Would I Lie To You?," "Demolition Man," "I Need A Man," "Who's That Girl?" and "17 Again" to name a few. This is good enough to tie me down until the release of the next Eurythmics studio album or the next Annie Lennox studio album. Her last album, Bare, was breathtakingly beautiful. It's been in my CD player for well over a year-and-a-half.

Alicia May Be 'Unbreakable' with Unplugged
Speaking of new releases, I'm really looking forward to the release of Alicia Keys Unplugged (10/11). It's about time MTV brought the music back to the station. Less faux reality tv shows and more music please! Anyway, Alicia's performance of her new single "Unbreakable" on the Fashion Rocks Awards got me hyped up. I'm really diggin' it. Let's see if radio takes to it the way they did her previous hits.

Toni Stop Teasing Us With 'Libra'
I'm really getting tired of waiting for Toni Braxton's upcoming release Libra. I've heard about four (maybe five) songs from it, those being "Take This Ring," "Trippin," "Supposed To Be" and "Please." I love all of them. This album's going to be hot! Quite possibly as good as or better than The Heat. Wouldn't that be something? But I mean Toni, cut it with the teasing. I guess I'll just have to wait until September 27th for the official release. And hope and pray that the record label doesn't push it back (again).

Where The Hell Is Stevie Wonder's 'A Time 2 Love'? & What's 'India.Arie's Song' About?
And speaking of being pushed back, when is the Stevie Wonder album A Time 2 Love coming out? It's been pushed back I don't know how many times. It's a shame. I really enjoyed "From The Bottom Of My Heart" and "So What The Fuss" (Stevie, Prince and EnVogue on one track--what more could you ask for? Be on the lookout for a new EnVogue record featuring the original members-Dawn, Max, Terry and Cindy). This album was supposed to have been out June 2004, then May 2005, June 2005, July 2005, now it's just TBA. Last I'd heard, he'd gone back in to the studio to record additional tracks. The title track "A Time 2 Love" was co-written with India.Arie. For those wondering what India.Arie's been working on lately--a two volume record. This two volume record is tentatively titled India.Arie's Song. The first volume will feature songs about life and relationships while the second volume will feature songs about love and politics. Seems like this might be her most accomplished and most ambitious effort to date. And rightfully so after the release of Voyage To India some would say.

Be on the lookout for new singles by the Fugees "Take It Easy" and Deborah Cox "A House Is Not A Home" (available on iTunes).

And word on the street is Janet Jackson (my girl!) is in the studio working on something new. Hopefully this next release will be within the range of greatness as janet. and The Velvet Rope or possibly something even better. I guess we'll just have to wait and see....

Something Very Close to Home

Well, here's a poem that I wrote last week....It hits very close to home (especially in regards to some of the family drama that occurred this summer). It's entitled:

It's oh so obvious
If we wanted you out
we wouldn't have had any second thoughts of putting the x on your spot
We wouldn't be here trying to intervene
And get you the help that you need
Your actions recently have raised eyebrows and strengthened concerns
For crying out loud you were
M.I.A.--We had to request an investigator to try to find out where you were
And you're going to come over here and scream
and blaspheme and raise hell
Because you're not getting the so called support you want

Email ThisBlogThis!Share to TwitterShare to FacebookShare to Pinterest
Labels: Poetry

Hope all are well. It's been a rough two weeks both on a national and personal front. My prayers go out to all the Hurricane Katrina victims. Such a devastating event. So many lives will be forever impacted and forever changed. And never quite the same.

Fall quarter classes begin for me tomorrow. So I'm trying to make sure I'm mentally and physcially in the right frame of mind. I'm excited about the year ahead though. Getting steps and steps closer to my dreams.

Be on the lookout for more posts....More about these last two rough weeks, poetry, gossip, and much more. In the meantime, I have music reviews posted at a friend's online magazine entitled, Pictures and Frames Magazine. She's just getting everything underway. Judging from the positive response, it looks like I'm going to be a regular contributor as a music critic. To check out the online mag please go to: http://www.picturesandframesmagazine.com/.